THE CARDBOARD JUNGLE
​Collage Series
​2011-2014 / 1999-2004 / 1989-1996
**SCROLL DOWN FOR IMAGES AND INTERVIEW**
"THE CARDBOARD JUNGLE" is a 3-Part Continuous Collage Series Spanning 6 Presidencies with Socio-Political Overtones from 1989 to Present
Multi-focused and self-taught American artist RR VAGNINI was born in Europe and educated there and in Virginia.  He first evinced drawing talent at age five, and his commitment to creating art was born a few years later, after he discovered an ancient votary statue in the woods near his Athens, Greece home.

​A prodigious body of past, recent and current work, The Cardboard Jungle, aptly illustrates VAGNINI’s commitment to exploring the unusual.
His 3-part 1,500 piece collage series (with the 4th in process) is executed in simple materials (cardboard, newsprint, "found" objects, images, etc.) and the Series comprises subject matter ranging from portraits of celebrities and musicians to scathing attacks on politics and society and a fearful look at the dark underside of modern life in America and the world over. Emotionally charged and fully capable of shocking, The Cardboard Jungle was originally begun as an experiment in techniques and conceptions for the artists exclusive enjoyment but quickly attracted the attention of an inner circle of admirers for the dynamism and spontaneity the series the series embodies. The Cardboard Jungle engages, amuses, challenges, and --ultimately-- enlightens the viewer.

RR VAGNINI’s prolific oeuvre is a chronicle of experimentation with color and application technique and is in international collections and he numbers several corporate and private commissions in his prodigious output. Although an infrequent exhibitor, Vagnini has consistently shown on both coasts and spends half the year composing and constructing collages and the other half exploring abstract painting.  He is an artist who aggressively seeks to engage his viewer in an aesthetic dialogue, with profound sociopolitical implications.  – S.T.
​from THE RETURN OF THE SON OF THE CARDBOARD JUNGLE
2011 - 2014 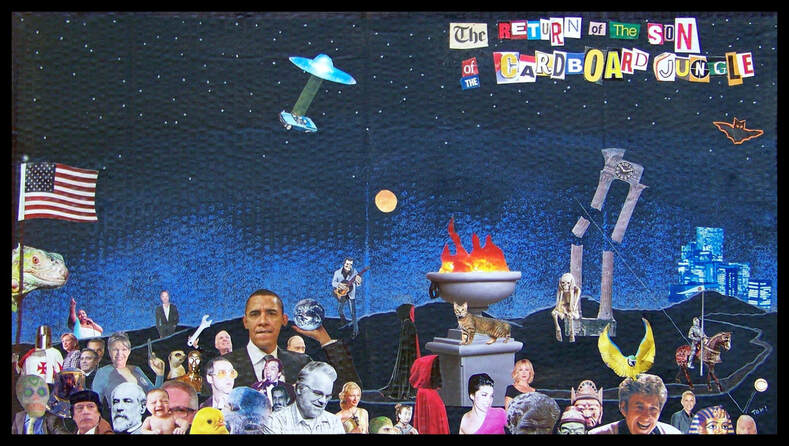 ﻿
​Whirlwind﻿: A Conversation with RR Vagnini and Jay Udall
(Originally Featured In "Gris-Gris"- A Journal of Literature, Culture and the Arts, Nicholls State University, Thibodaux, Louisiana)
Jay Udall:  Tell us about the genesis of The Cardboard Jungle Series When did you start on this project, and what was your initial idea or vision for the series?
RR Vagnini:
I first began The Cardboard Jungle in the eighties. I was living in Monterey, sharing an apartment with my brother and another guy we called “The Goat” because he could chew gum and drink beer at the same time. He loved Reagan, I didn’t. I used to tease him by leaving crudely made collages on his door. Most were simple creations on scrap cardboard, but they attracted a fan base almost immediately from visitors and such for the vitality the work embodied. After they were unceremoniously ripped down, I began to collect them in a box. One day I decided it would be interesting to try and make a series out of them. My initial thoughts were justified when a gallery approached me about showing them. What started as a joke, ended up being a serious body of work (usually the other way around in life), and all 3 prototypes are completed.
My vision was to try and create an all-encompassing body of work that is free from the constraints of painting (I was tired of painting at the time), able to reach into any subject– be it nature, politics, or social commentary, and based on completely recycled materials.

It is akin to putting my thoughts -so many of them- on various types of cardboard, without any edit…and of course it had to be visually striking and funny at times, like me (laughs.) Vast in scope, I wanted to create art for everyone that are topically relevant subjects, portraits of all types, complaints, ideas, jokes, jabs, harsh opinions, joyous opinions and observations- everything, really....(continued below)
**INTERVIEW CONTINUED BELOW-- PLEASE SCROLL DOWN**
​from THE SON OF THE CARDBOARD JUNGLE
1999 - 2004 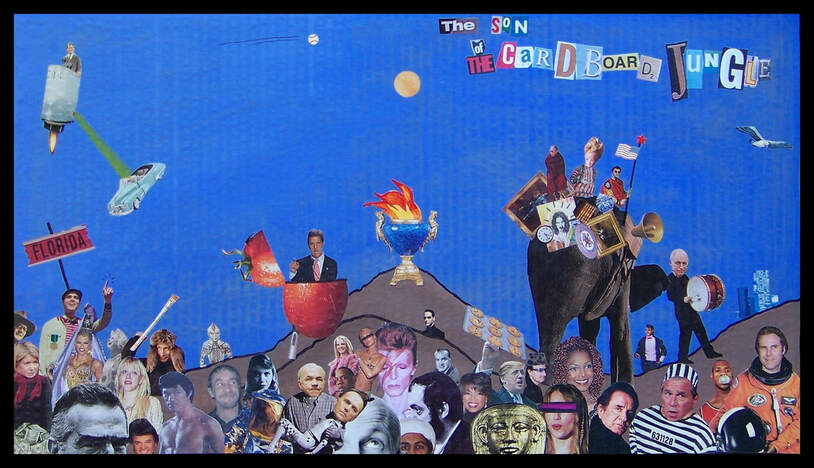 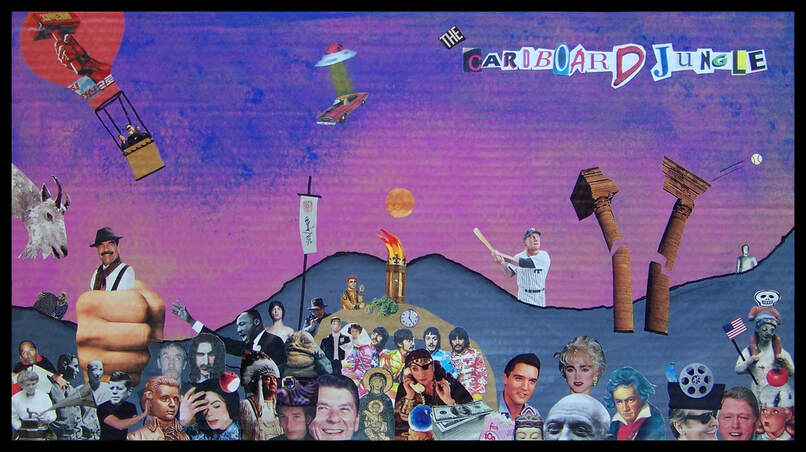