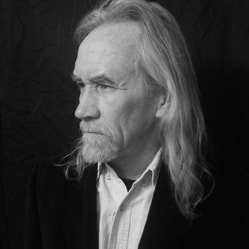 ESSAY by Leo Boeckl
RR VAGNINI, ABSTRACT EXPRESSIONISM AND THE ART WORLD
​
The world famous art critic Irving Sandler wrote in his latest book that for the last few decades he, and others, had expected to uncover another abstract expressionist artist who had painted in relative anonymity during that school's heyday. Given the rigid social structures in which mid-20th century artists worked, Sandler's notion seems unlikely to be fulfilled as those artists worked in relative close proximity even when they disliked one another for purely personal reasons.  However, the notion that today an artistis building out a Meta Expressionist body of work in isolation and anonymity is not only a real possibility but rather very likely.

In today's world driven as it is by tweets and sound bites, such an artist has, in fact, likely been working in plain view. Unlike Sandler’s assertion, this should now be expected. The reason for this is that the Abstract Expressionist School had brought to a head the discussion of techno-economic impacts wrought on society by heavy industrialization. However, they had not moved beyond where we were at in the middle of the century. And that situation has radically changed.

Central to the discussion of art from the Post Impressionists through the Abstract Expressionists was the argument of form versus color. From the end of the 19th century through the 1950's artists expressed their perspectives on technology as either the force which would improve humanity or simply create additional problems that the artist was obliged to point out for society's sake.

The Cubists and the Futurists clearly embraced the future which they believed technology would bring. The Expressionists and the Surrealists articulated concern for the changes in the world which they felt were occurring in social, spiritual or metaphysical terms. Even as late as the 1950's an artist had to weigh in on one side of the argument or the other. Pollock, Still and de Koonig utilized color to articulate their worldviews while in contrast Gottlieb, Kline and Motherwell focused on form.

In the context of the evolving human world view which existed at that time, those artists thoughts and work had been leading edge commentary. However, much has changed in the decades post Abstract Expressionism relative to technology and how we perceive it's effects. The techno-economic shift from smoke stack industries to a knowledge-based economy alone has created new multicultural aspects of society and radically changed social structures, our spirituality and our worldviews.

The impacts of technology and the shifts it has undergone should therefore create, by sheer definition, expressive opportunities for those artists who dare to move beyond the old argument of form versus color to one where form and color are inextricably fused together to assert new perspectives. The challenge, of course, is for such individual artists struggling to be heard above the electronic din. It may be such an incredibly difficult task that some of those artists have likely decided it would be easier to scale less formidable obstacles.

Fortunately for us there are still painting heroes of thought and action in our world today. To our shame, however, the art world has failed to seek them out. Rather they work alone, unabated - all the while standing right in front of us, driven solely by their own internal force. One example writ large for us is Rick R. Vagnini who has worked in plain view in California for decades.

RR VAGNINI's work is the fusion of form and color. Neither component consistently prevails, just as neither is stereotypically sacrificed to the other. His vision balances both elements. His vision is not sequestered by rendering one for the body of politic or spirituality. Instead, Vagnini’s compound images are the fusion of where we are and where we are collectively headed, like it or not.

When Jackson Pollock painted he utilized improvisational jazz to enable him to momentarily break free from the everyday mindset he lived within. Vagnini uses the work of musicians from Frank Zappa to Beethoven to neutralize the mundane to scale civilization itself. That alone should tell us how immense his personal worldview is. Zappa once said “without deviation progress is not possible.”

What Vagnini says to us in his paintings is – listen and open your eyes - the world is no longer black and white. We cannot simply choose one over the other – both must be understood.

Our world is full of paradox and complexity. Vagnini does not shrink from this reality; rather, he embraces it. He can be bombastic, irreverent and at the next moment soothing and educational. He does not force his art to be an “either” or an “or”. He takes a stand to explain his emotions and thoughts without resorting to caricature.

In a world weighted towards simplistic views and sound bites skewed in a single direction – he stands both up and out. Taking such an independent stand is more challenging for Vagnini than it was for de Koonig or Pollock as they had a group or school in which to shelter and fortify their resolve.

Vagnini's balanced analytical perspectives in moving beyond Expressionism are not only a statement for our times but a testament to his skill as well. To depict the cacophony and complexity of today's world in balanced compositions requires talent rarely glimpsed even generationally. To keep form and color in a harmonious deviation is new ground broken. Aesthetically we see and experience both as his command of line and color pull off this astounding feat time and again.

I hope once you have the opportunity to review the paintings you will experience what I have – astonishment and delight in the same moment.

RR VAGNINI is the father of a new paradigm, moving past Abstract Expressionism into the field of Meta Expressionism. Like Cezanne, he is taking us to the highest peak and allowing us to see an extraordinary view for a new age.  His paintings ask only the favor of a single request – please open your mind's eye to full aperture.